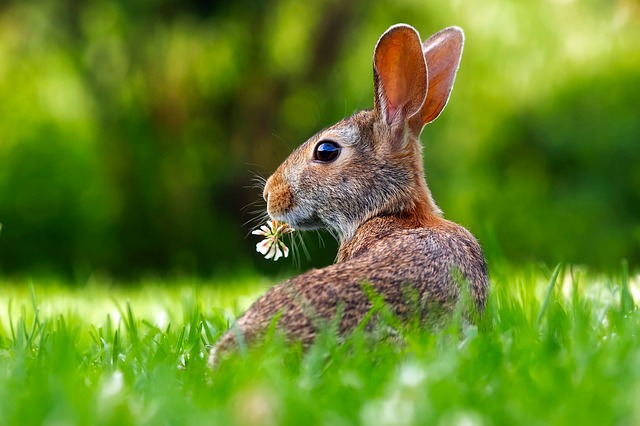 We all know about how Mrs. Rabbit gave Peter chamomile tea after he returned home with a stomach ache from eating too many of Mr. McGregor’s cabbages. He had also suffered a fright as Mr. McGregor chased him out of the garden. Mrs. Rabbit was a wise mother, as chamomile not only settles the stomach, it encourages calm and restfulness, important traits for a scared little bunny.

But did you know that there are many kinds of chamomile? German Chamomile (Matricaria recutica) looks like a daisy to most of us. It can be dried to make tea, or infused into oil. As an infused oil it has a smokey, sweet herbaceous scent and a blue color from its high level of chamazulene. This chamazulene along with another compound, a-bisabolol, give it pain relieving and anti-inflammatory characteristics.

Peter was probably bruised and sore, so Mrs. Rabbit may have rubbed some Roman Chamomile (Anthemis nobilis) infused in jojoba oil into Peter’s sore muscles before he went to sleep. This chamomile is sometimes referred to as English Chamomile, so Beatrice Potter may have had this one in mind. It is similar to German Chamomile, but slightly yellow in color. It has similar calming characteristics and may also be used for skin rashes such as eczema or psoriasis.

Cape Chamomile (Eriocephalus punctulatus) is very high in esters that help to calm the mind. It is often used in compresses and skin care products.*

We would love to hear your thoughts Cancel reply

If you have questions about any of our products, please don't hesitate to contact us by clicking here .